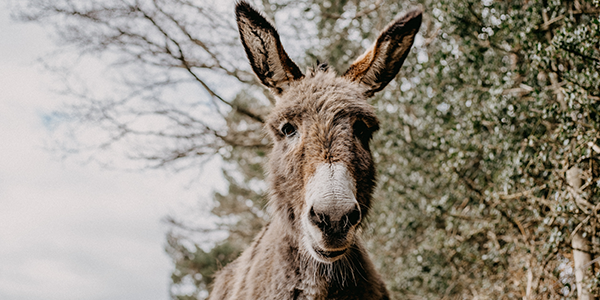 Did you know that donkeys are one of the oldest domesticated animals? It’s true. In fact, they were first domesticated around 3,000 BC, probably in Egypt or Mesopotamia. Being a part of the human experience for that long, there’s no wonder that there are some donkey myths out there. Continue reading for the most common. Like quine myths? Here’s some top draft horse myths. Also, if you are looking for a horse property for sale in Colorado, contact Colorado Horse Property today and speak with one of our horse-person realtors.

The most common donkey myth is that they are stubborn and stupid. This is not true. Donkeys are usually not as cooperative as horses. In other words, they’re not as easy to guide with a lead. Donkey’s are more hesitant due to the way they evolved. Horses evolved on plains where they had many sources of food. Donkeys evolved in mountainous desert areas with less resources. Donkeys take the time to assess their situation more than horses. They’re deciding whether they should stay where there’s food or move on.

Donkeys also have a reputation for being strong pack animals. However, there is a myth that they can carry more than other equines and that’s just a myth. Donkeys can only hold up to 20% of their weight. Donkey’s often don’t show they’re in pain for the same reason they’re perceived as stubborn. In a fight of flight situation, donkeys are more likely to stay and fight. Fight animals cannot show vulnerability to their opponents and so donkeys do not show their pain until they are very sick or critically injured.