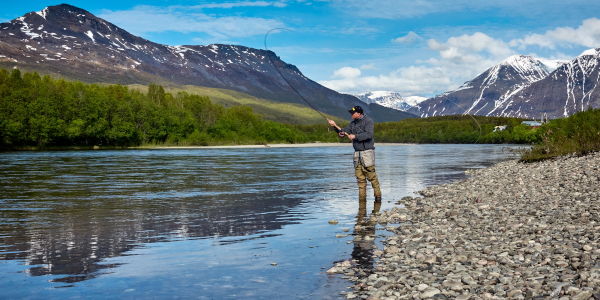 Because of its dry climate and land-locked location, many people think that the state of Colorado lacks waterways. Not only does Colorado have some of the most beautiful waterways in the country, it is also a great place for fishing. Summer is the busy season for anglers and the best fishing spots in Colorado usually crowd with anglers during this season. But don’t worry, you can also fish throughout the entire year in Colorado and get the same great catches. Trout, including brown, brook, and lake trout abound in the state’s rivers and lakes. The official state fish is the cutthroat trout, an indigenous variety of the trout in Colorado.

Gore Creek
Gore Creek is a tributary of Eagle River and is around 18.5 miles long. Although this stream is relatively small, it is one of the best fishing destinations in Colorado. You can find lots of cutthroats, brooks, browns, and rainbows in this stream. Gore Creek runs alongside the route of U.S. Highway 6 and Interstate 70 in the town of Vail, which makes it easier to access than other waterways.

North Platte River
The North Platte River is a major tributary of the Platte River and is approximately 716 miles long. It winds through Colorado, Wyoming, and Nebraska. It is important to know that some sections of the river can only be accessed by raft or kayak adding to the adventure of fishing in this destination.

Upper Arkansas River
The Arkansas River is a major tributary of the Mississippi River. It generally flows to the east and southeast as it traverses the U.S. states of Colorado, Kansas, Oklahoma, and Arkansas. The river’s source basin lies in Colorado, specifically the Arkansas River Valley, where the headwaters derive from the snow pack in the Sawatch and Mosquito mountain ranges.